Nigerian universities are suffering from neglect. Why this should stop 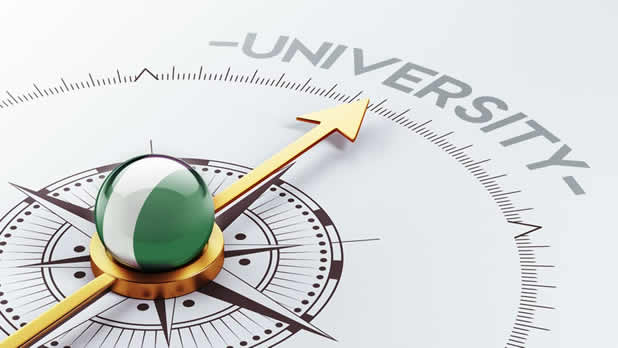 “Quality education, inclusive education, has to be among those for the post-2015 agenda because if we don’t put it with all the responsibility that is entrusted upon us we would not live up, in my view, to the expectations of the global community.”

In the last 40 years government funding in the education sector in Nigeria has varied between 6% and 9% of the national budget. This is lower than most other African countries which range between 11% and 30%.

This meagre allocation is also expected to fund the country’s higher education system.

After independence in 1960, all Nigeria’s states were determined to make education accessible at all levels. This, plus population growth led to a significant increase in the number of tertiary institutions.

It’s clear that the budget allocation can’t do justice to the needs of these institutions. If Nigeria is going to join the league of industrialised countries it needs to fund its education sector adequately. Most importantly, it needs to invest in solid infrastructure for teaching, research and national development.

Funding
The main source of funding for Nigerian tertiary institutions has been annual budgetary allocations from the state and federal governments. To complement these allocations, the federal government established an education trust fund in 1993. This agency has been supporting government tertiary institutions under the Tertiary Education Trust Fund Act. This imposes a 2% education tax on the profits of Nigeria’s registered companies.

The fund has played a significant role in promoting quality and education standards in Nigerian tertiary institutions. These funds have been used for:

construction and rehabilitation of buildings and laboratories,

information and communication technology, and

Fees and levies are another source of income. For government-owned institutions, the directive is not to charge tuition fees but to impose levies. The levies are approved by each governing council. This means that they vary from institution.

Another source of revenue is internally generated income. Institutions are expected to generate additional income from grants, donations and other fund raising initiatives. But this has proved to be an uphill battle. Nigeria has a poor culture of donations because of the belief that the government is responsible for providing free education at all levels.

Fixing the problem
The first major step to fixing Nigeria’s tertiary education problems would be to increase budgetary allocations to between 11% and 15%.

I don’t believe that raising fees is a sensible road to take. Instead, the government should reintroduce scholarships, bursaries, grants and loan schemes, as was the case before the oil boom.

Another major hurdle that will need to be cleared is relations with labour unions, in particular the Academic Staff Union of Universities.

The role of private institutions
I also believe that private higher education institutions have a significant role to play in the delivery of quality education and national economic development. They have to be supported. While I was the chairman of the Committee of Vice-Chancellors and Registrars of Private Universities in Nigeria between 2014 to 2016, the committee proposed that private universities should also benefit from the Tertiary Education Trust Fund.

This money would be used for staff development and research. Loans, at single digit interest rates, could be provided for infrastructural development.

These recommendations were based on the believe that these institutions have the capacity to increase enrolment and cater for an increasing number of people seeking admission. This would also mean that thousands of students would no longer have to leave the country to pursue their studies elsewhere.

Unfortunately, the law that lead to the establishment of the Tertiary Education Trust Fund doesn’t accommodate private institutions. This needs to be amended.

In conclusion
It is apparent that Nigeria has failed to deliver quality education due to poor funding of the education sector and rising costs of education, among other factors.

There must be a methodical approach to improving education funding for Nigeria to achieve the sustainable development goals. The funds must be used appropriately and there must be accountability across the board.

This article is republished from The Conversation under a Creative Commons license. Read the original article.

By The Guardian Vouches for safety, efficacy of jabs, warns of third wave. The Nigerian Academy of Science (NAS) has warned that COVID-19 vaccines do not prevent infection but instead stop the virus from killing the patient. This is...

By Health Wise Punch A renowned Professor of virology and former Vice-Chancellor of the Redeemer’s University, Oyewale Tomori, says if people do not change their attitude and go back to obeying the non-pharmaceutical interventions recommended for the prevention of...

Happy International Women’s Day! Today, as the world celebrates the social, economic, cultural, and political achievements of women, we are pleased to share report of the Academy’s Women in Science Summit themed: Women in Science and Nigeria’s Development. The... 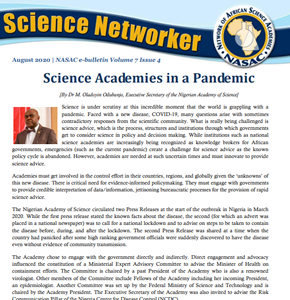