The Vice-President, Prof. Ekanem Braide FAS, and Dr.Doyin Odubanjo (Executive Secretary) represented the Nigerian Academy of Science at the Second Forum BIE 2030 held in Mexico City within the period November 20-22, 2018. The Forum was organized by Education Relief Foundation (ERF)in collaboration with the Secretariat of Public Education (SEP) of the United Mexican States. The objectives of the Second Forum BIE2030 were 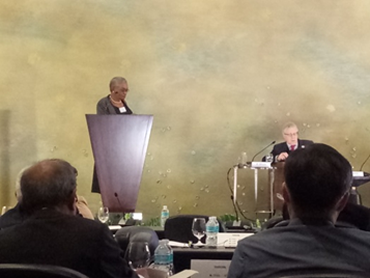 The meeting began with background presentations on Outcomes and Recommendations from 2017 ERF Regional Stakeholders Consultations. Thereafter, experiences, challenges and opportunities in BIE were shared by various experts and government officials from Latin America, Asia, Middle East and Africa. There were also presentations and discussions on the theme Language as a vector of inclusivity.The Global Guide was formally launched after whichstatements on International Call for BIEwere made and the Call signed. The NAS Vice-President signed the Call on behalf of the Nigerian Academy of Science after making the following statement.

After the conference, Sheikh Manssour Bin Mussallam held a brief meeting with Prof. Norbert Hounkonnou (President, National Academy of Sciences, Arts and Letters, Benin Republic), Prof.Ekanem Braide, Dr. DoyinOdubanjo, Mrs Jaqueline Olang Kado (Executive Director, Network of African science Academies) to discuss a way forward on running pilot projects in Sub-Saharan Africa on the basis of the Global Guide on BIE. A planning meeting was proposed for a date within the second half of February 2019.

Professor Kayode Adebowale FAS delivered his inaugural lecture at the University of Ibadan on Thursday, 9th January, 2020. His lecture was  titled ‘Chemistry and the drive towards sustainability: An unending search for suitable indigenous raw materials’ Standing from left:...

The Nigerian Academy of Science (NAS), in partnership with the UNESCO, University of Medical Sciences Ondo, University of Lagos, and Chrisland University, organized a Summit, tagged “Women in Science and Nigeria’s Development”, at Reiz Continental Hotel, Abuja from 21st...

The continued dominance of Big Data Analytics (BDA) and Artificial Intelligence (AI) is reshaping the future of work globally, and begs the question - is Nigeria ready for the future of work? In a bid to address this, the... 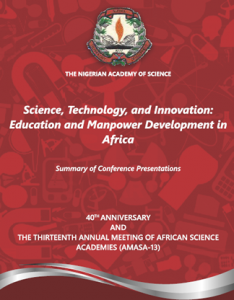